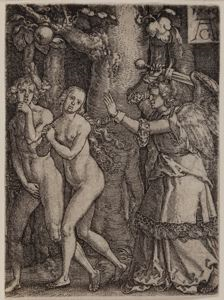 
Object Type: Works on Paper
Creation Place: Europe, Germany
Medium and Support: Engraving on paper
Credit Line: Gift of Dr. William Fitzhugh, Jr.
Accession Number: 1955.54.a
Heinrich Aldegrever was a German painter and engraver who completed this piece in 1540. This piece is called The Expulsionfrom Paradise which is an engraving on paper from a series of six plates. The engraving depicts a well-known scene from the Bible in the book of Genesis where Adam and Eve are being cast out of the Garden of Eden. Adam and Eve were cast out from Eden because they ate the fruit from the tree of knowledge which is seen in the background. When Adam and Eve ate the fruit from the tree the knowledge what they gained was the realization that they were naked, which Adam portrays. The other figure depicted in this piece would be assumed by most to be the archangel Michael; however it is perhaps more likely a sixteenth century notion of the cherubim sent to protect the tree of knowledge as told in Genesis.


This sixteenth century etching by Heinrich Aldegrever depicts the moment in the Biblical story from Genesis in which Adam and Eve are expelled by God from Paradise. After having bitten from the Tree of Knowledge, the two naked and no longer saintly sinners are pursued by a sword-wielding cherubim. They cup their hands in a pleading position as their gaze extends and fixes itself back towards the non-bargaining royal guard figure. The tree occupies the backdrop as human relationships and a focus on justice occupy the forefront of the image.

Your current search criteria is: Objects is "The Expulsion from Paradise (from a series of 6 plates)".