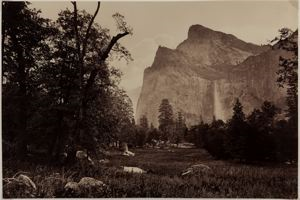 
Object Type: Photography and Video
Creation Place: North America, United States
Medium and Support: Albumen print
Credit Line: Gift of Susan Herzig and Paul M. Hertzmann
Accession Number: 2004.21
Carleton E. Watkins is considered one of the greatest photographers of the American West. Traveling throughout the western United States, he made thousands of large plate photographs of the Yosemite Valley, Columbia River, the Sierra Nevada, and the Pacific Coast in Oregon. To make photographic prints at this scale, Watkins used massive glass-plate negatives painstakingly coated and developed on site, requiring the transportation of his cumbersome tent, glass plates, and chemicals into the wilderness.

His pictures of Yosemite Valley were among the first photographs of the region seen on the East Coast and served an essential role in Congressâ establishing Yosemite as a National Park in 1864. Watkinsâ photographs of the West remain as important historical documents of the landscape, showing a moment before the onslaught of massive development.
Dimensions

Your current search criteria is: [Objects]Object Type is "Photography and Video" and [Objects]Period is "19th Century" and [Objects]Country is "United States".