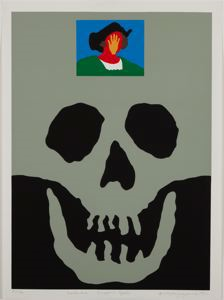 
Object Type: Works on Paper
Creation Place: North America, United States, California
Medium and Support: Serigraph on paper
Credit Line: Gift of Elsa Cameron
Accession Number: 2002.7.2
Rupert GarcÃ­aâs Calavera Crystal Ball is a serigraph (screenprint) that combines imagery from Mexican folk art and pop art to emphasize colonialismâs effects on native people and enduring legacies of colonial violence. Rather than characterizing Christopher Columbus as a hero, as he has often been shown in the dominant Western imagination, GarcÃ­a uses color blocking to depict him with minimal detail and places his image above a menacing skull that spreads to the edges of the print. The title of the piece, a composite of Spanish and English with âcalaveraâ meaning skull, evokes a prophecy of death. The seemingly contradictory combination of the skull, which represents death, and the crystal ball, which represents what may be coming, either foreshadows a gruesome future or speaks back to the past. One interpretation of the pieceâs title along with its symbolism could be that GarcÃ­a is sending a message to Christopher Columbus, as if saying to him: look at what your actions have done. Alternatively, GarcÃ­a, as an artist deeply involved in Bay Area leftist political movements, may be sending a message of warning to the viewers about our own future. In both of these interpretations, his piece is the crystal ball itself, revealing the truth about a future that is yet to be seen.

Your current search criteria is: Objects is "Calavera Crystal Ball".