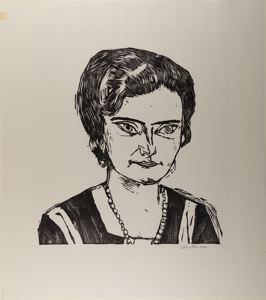 
Object Type: Works on Paper
Creation Place: Europe, Germany
Medium and Support: Woodcut print on paper
Credit Line: Museum Purchase, Susan L. Mills Fund
Accession Number: 1940.96
Max Beckmann, a skilled portrait artist, made this work in 1923 while living in Germany, before his art was labeled as âdegenerateâ by Hitler and the Nazi Party. Yet, Beckmannâs early work is still influenced by trauma and anxiety. Serving as a medical officer during WWI, Beckmann was scarred by the terror he witnessed, which can be seen in his own work as well as the artists he influenced. Beckmannâs Portrait of âFrau H.M.â is made up of sketch-like lines, making the figure seem less solid, giving off a more anxious air. Beckmann eventually moved to the United States to teach at various institutions, including at Mills College during the summer of 1950. While Beckmann skillfully portrays everyday people and objects, he depicts much more than that: he is showing human emotion and anxiety through the lens of reality.

Your current search criteria is: Objects is "Portrait of 'Frau H.M.' (Naila)".