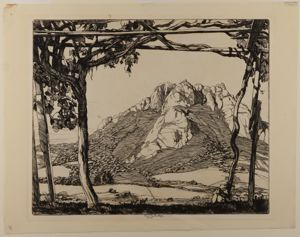 
Object Type: Works on Paper
Creation Place: North America, United States, California
Medium and Support: Etching on paper
Credit Line: Gift of Albert M. Bender
Accession Number: 1925.91
Roi Partridge was a modernist etcher and member of the San Francisco artistic circle that included influential photographers Ansel Adams, Edward Weston, Dorothea Lange, and Partridgeâs first wife Imogen Cunningham. By 1920 Partridge was teaching at Mills College, where he became chair of the art department. In 1925 he became the first director of what was then called the Mills College Art Gallery. With many of his artist associates donating artwork to the gallery when it opened that year, Partridge, with the help of local philanthropist Albert Bender, was able to develop the first public collection of modern art in Northern California.

Partridge was a traditional etcher with outstanding draftsmanship. His subject matter was primarily landscape, and in particular, the mountains and coastal areas of the Pacific Northwest.
Keywords Click a term to view the records with the same keyword
Click here to show Keyword Descriptions
Exhibition List
This object was included in the following exhibitions:
Dimensions
Bibliography List
This object has the following bibliographic references:
Portfolio List Click a portfolio name to view all the objects in that portfolio
This object is a member of the following portfolios:

Your current search criteria is: Objects is "Santa Rosita".