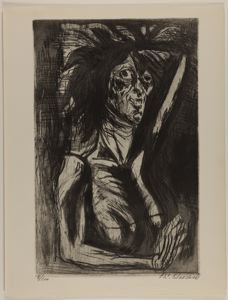 
Object Type: Works on Paper
Creation Place: North America, Mexico
Medium and Support: Etching and aquatint on wove paper
Credit Line: Gift of Dr. Paul Wescher, by exchange
Accession Number: 2001.10.2
Jose Clemente Orozco, who is considered one of the âThree Greatsâ of the Mexican Muralists, was highly impacted by the tragedy, violence, and suffering he witnessed during the Mexican Revolution (1910-1920). Contemporaries of Orozco viewed him as an incredibly cynical man, and this can be seen in his artworks. Orozcoâs works usually depict the darker aspects of the human experience, and La Loca is no exception. Made during his later years, the work has all of the characteristics that define Orozcoâs works. The print is critical of both the woman he is depicting as well as the world she lives in, yet Orozcoâs depiction of her is almost a caricature. The figure of La Loca has giant eyes bulging from her head, her hair is so disheveled it defies reality. This cartoonish depiction creates a dark, cynical humor that he used in many pieces. Orozco was incredibly jaded by the Mexican Revolution and in turn, of human beings overall. His work is highly critical of the world and of people, as well as incredibly emotional. Orozco, unlike other artists from his period, was willing to show the underbelly of humanity, making his work more difficult to look at but also more emotionally powerful.