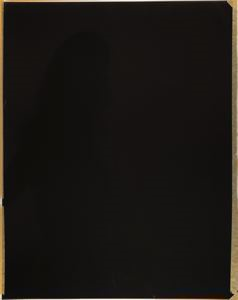 
Object Type: Photography and Video
Creation Place: North America, United States, California
Medium and Support: Gelatin silver print
Credit Line: Museum Purchase, Susan L. Mills Fund
Accession Number: 1966.16
This large photograph appears to be mainly blackâuntil a closer look reveals the hint of a figure. This symbolically mirrors the struggle that oppressed people endure silently. In fact, this figure is erased by shadow, nearly blending completely into the background. While we can assume that this figure is female, we cannot tell their skin tone. This can represent the dehumanization that oppressed people go throughâtheir cultural identity is taken away and they are reduced to being less than people.

In a series created one year earlier, Heinecken collaged images from pornographic magazines and photographed them. The figure that we see is a woman, so it is quite likely that her image was taken from porn as well. However, it is not a sexual image. This speaks to womenâs autonomy, because men have been taking ownership over womenâs bodies for centuries, and it is only recently that women have reclaimed them. Taking a found image of a person and reproducing it into fine art for personal gain raises the question of possession, or ownership. Taking a pornographic image of a naked woman, erasing all traces of her ethnicity, and appropriating it for a new purpose without the womanâs consent is a tricky subject, especially when the artist is a white man. Exploitation of people sexually is another controversial topic, as sex (or implied sex) for commerce is rife with opportunities for wrongdoing and abuse, and has direct ties to the fetishization and exoticism that women experience. The inability to see the figure hints to erasure of struggle, and the marginalization or dehumanization of the oppressed.

Your current search criteria is: Objects is "Obscured Figure #1".