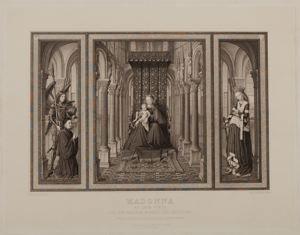 
Object Type: Works on Paper
Creation Place: Europe, The Netherlands
Medium and Support: Engraving on paper
Credit Line: Found in Collection
Accession Number: 1975.93
This engraving by the German printmaker Hugo BÃ¼rkner was made in 1888 after the Flemish master Jan van Eyckâs original fifteenth century painting. BÃ¼rknerâs print was probably commissioned as part of a catalogue published by the GemÃ¤ldegalerie Alte Meister (Old Masters Picture Gallery) in Dresden, Germany, where van Eyckâs painting is located. BÃ¼rkner captures the level of detail for which van Eyck was renowned, down to the Latin inscriptions carved on the triptychâs original frames. The image is a Marian devotional painting typical of the Northern European Renaissance, with Mary and the baby Jesus the central focal point of the composition. Mary, dressed in sumptuous robes, sits enthroned in front of a cloth of honor with the Christ child on her lap. The left wing shows the triptychâs patron (believed to be a member of the Giustiniani clan, a prominent Italian mercantile family) kneeling in front of St. Michael; in the right wing St. Catherine stands reading a prayer book. All five figures are located within the same church-like architectural setting, although the saints and donor are visually separated from the Madonna and Child by the frames of the triptych. BÃ¼rknerâs only modification to van Eyckâs original piece is the addition of his monogram, with his initials and the date of the printâs creation, at the base of the column in the lower left-hand corner.