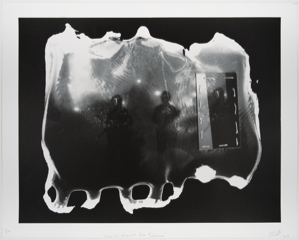 
Object Type: Works on Paper
Creation Place: North America, United States, California
Medium and Support: 3 color halftone screenprint on 100lb cougar paper
Credit Line: Museum Purchase, Selected by Simone Gage, Sage Gaspar, Sydney Pearce, Melika Sebihi, and Taya Wyatt, students in the Mills College Fall 2020 Museum Studies Workshop
Accession Number: 2020.11.1
Daniel Valencia is a self-taught photographer who practices traditional black and white darkroom techniques. He was born in San Jose and raised in Seven Trees, San Jose by his Mexican-American mother. Seven Trees was its own unincorporated city and was not recognized as a part of San Jose until it was annexed in 2009. Growing up with no designated police force, city officials, or governing authority in the area, Daniel chose a skateboard and a camera as his way of observing, documenting, and processing the mayhem around him. In 2014, he began working as a darkroom technician, where he started exploring his current techniques of burning and physically manipulating photo negatives, as well as mural sized darkroom printing. He is the official photographer for the political printmaking collective the San Francisco Poster Syndicate.

--Taya Wyatt, December 2020
Portfolio List Click a portfolio name to view all the objects in that portfolio
This object is a member of the following portfolios: