Untitled (from the War Drawing Series) 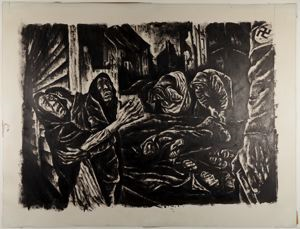 Untitled (from the War Drawing Series)


Object Type: Works on Paper
Creation Place: North America, United States
Medium and Support: Pen and ink on paper
Credit Line: Gift of Margaret Johnstone Barlow, class of 1929
Accession Number: 1988.9.13
Untitled (from the War Drawing Series) evokes a visceral emotional response to war and genocide. The swastika on the armband of the Nazi soldier clearly marks the antagonist of this image. The people confronted by the Nazi are fragile and huddled together. Dead bodies in the mid-ground offer a glimpse into their collective near futures. A bleak cityscape creates a dramatic backdrop to this violent interaction, reminding the viewer that genocide is the product of a so-called advanced civilization. While this drawing was created after German Expressionism, it reflects many of the same themes of the earlier movement. De Erdely, born in 1904, fled Hungary in the 1940s after being banished by early Gestapo members. After witnessing two separate world wars, De Erdelyâs art cannot be naive. He depicts visceral suffering as a direct result of war. Perilous cityscapes and war-torn families are inherent in both De Erdelyâs work as well as that of many German Expressionists, thus depicting an almost circular notion of history, with dreaded events doomed to be repeated again and again.

Your current search criteria is: Objects is "Untitled (from the War Drawing Series)".