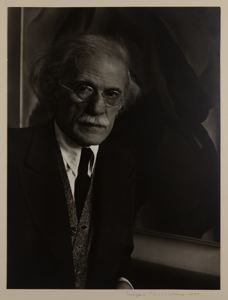 
Object Type: Photography and Video
Creation Place: North America, United States, California
Medium and Support: Gelatin silver print
Credit Line: Museum Purchase, Susan L. Mills Fund
Accession Number: 1941.10
A pioneer in her field, Imogen Cunningham was a photographer, a feminist and a mother who had a vast knowledge of chemistry, which was her major in college and provided her a deep technical understanding of photography.

Alfred Stieglitz, the subject of this image, was a New York-based photographer and owner of Gallery 291. He was well known in the art world for bringing modernist art to America, including work by artists such as Picasso, CÃ©zanne, and Matisse among others. Albert Bender described him as an âintellectual talking machine, but nevertheless . . . the chief man in America to have raised photography to a high plane.â Cunningham visited .Stieglitz in New York City with the hope of exhibiting inhis gallery. To prove her worth she asked if she could photograph him with his own camera. Cunningham had Stieglitz pose in front of Black Iris, a painting by Georgia OâKeeffe, his lover. Stieglitz was not impressed with her portraits of him, as he claimed he always looked good in photographs.

Her portraits portray the aesthetics of Group f/64: a sharp and clear image, the perfect use of light and shadow, and her close compositions. In this portrait she captured Stieglitz in a serious stare, as if he is daring the photographer and even the viewer. He is standing in a relaxed but elegant pose, with glimmers of light on his face highlighting his wrinkles, as if acknowledging his expertise.

Ansel Adams once wrote a review of Cunninghamâs work and said, âHer work is very beautiful and sincere.â He was right; her depiction of her subject only spoke visual truth and with her daring style, she clearly photographed Stieglitz as he saw himself, a man in charge of the world.

Your current search criteria is: Portfolio is "Oakland Artists" and [Objects]Display Artist is "Imogen Cunningham".