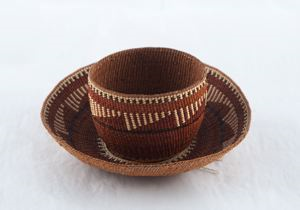 Design: There are maidenhair fern stripes, which is a design element more commonly seen on âredâ baskets from the Karuk.

Structure: This is a stunning example of a true master weaver at work. Itâs clearly a trinket for a collector but itâs so finely done. The weave is strong, the overlay is exceptional. I really think it could potentially be the work of Nettie Ruben (1870s â 1957), a renowned Karuk weaver. Her work is well documented in Ron Johnsonâs books and in the Clarke Museum of Eurekaâs records. I have seen a teacup so similar to this one made by her in one of Ron Johnsonâs catalogs, see citation â which got me wondering if itâs hers (if it was made prior to 1957) or a student of hers if itâs more contemporary. I also noticed it has these tiny string tie offs on the end of the weaving on the cup and saucer to keep from unravelling perhaps (we could look at other examples of Nettie Rubenâs work to see if thatâs her style?). Also just want to note that no one would ever actually drink from it, it was certainly made for a collector.

Cultural affiliation notes: The record states âKarukâ and I think it would be very accurate to assume thatâs correct. The dominance of the woodwardia fits with Karuk, but Iâd be curious how the donor came to know it was Karuk specifically, perhaps they knew a little more about where they acquired it. Specifically relating to learning the maker.

Your current search criteria is: Objects is "California Karuk twined cup and saucer".