Commemorating Every Black Man Who Lives to See Twenty-One 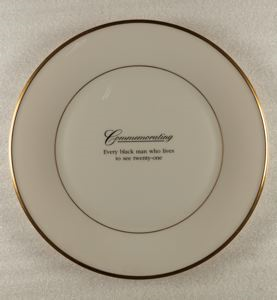 Commemorating Every Black Man Who Lives to See Twenty-One


Object Type: Ceramics
Creation Place: North America, United States
Medium and Support: Glaze and gold paint on Lenox porcelain plate
Credit Line: Gift of Fay Pfaelzer and Jonathan Abrams
Accession Number: 2013.5.6
This piece is one in a series of twenty commemorative plates in which Weems commissioned the American china manufacturer Lenoxâknown for their production of customized dinner plates and tableware for the White House, U.S. Embassies, and governorsâ mansionsâto produce commemorative plates celebrating achievements and cultural contributions in Black American history, both grandiose and tragically simple. Weems appropriates this classic design of a white, gold rimmed dinner plate with centered, plain text commonly used in celebration of the political triumphs of the wealthy elite to instead recognize and honor the accomplishments of Black Americans, and does so in such a way that calls our attention to the powerful significance of such achievements as a Black man living to see the age of twenty-one. Given the 2020 resurgence of the Black Lives Matter movement in protest of police brutality and systemic racism in the United States, the harrowing message conveyed through the text on this plate is as relevant today as it was when Weems created this piece in 1992. Other commemorative plates in the series include Commemorating Blues, Jazz, Collard Greens & Thelonious Monk and Commemorating Jo Ann Robinson, Claudette Colvin, Rosa Parks for Not Getting Up.

Your current search criteria is: Objects is "Commemorating Every Black Man Who Lives to See Twenty-One".