Sometimes I Want to Kill the President [from the Exit Art Print Portfolio, Expose] 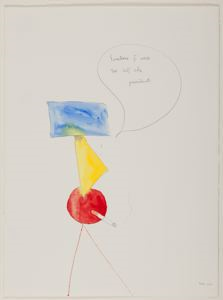 Sometimes I Want to Kill the President [from the Exit Art Print Portfolio, Expose]


Object Type: Works on Paper
Creation Place: North America, United States, New York
Medium and Support: Hand-painted monoprint, pencil and watercolor on paper
Credit Line: Gift of Exit Art c/o John Koegel, The Koegel Group LLP
Accession Number: 2012.13.3.b
Exit Art was established in 1982 as a non-profit cultural center, focusing on establishing representation for artists who challenged social, political, and aesthetic norms through their artwork, and the interaction between art and the audience. Mills College Art Museum is privileged to have four Exit Art portfolios, two pieces of which are on display in Moments of Impact. Sometimes I Want to Kill the President, 2008, is an aesthetically simple piece, with the plain white background, basic shapes, and primary colors leaving room for the penciled text to be the impact of the piece. The piece was created during the second term of President George W. Bushâs presidency, after the passing of the U.S. Patriot Actâa decision that concerned many artists regarding their artistic freedom. The blunt statement is complicated by the edits that are indicated, as though it is a thought being edited before spoken. But why is it edited? For clarity, or censorship? The edit changes the statement from âweâ, as in, âI, too [want to kill the president]â to a frank âIâ statement, begging the question, what did the figure really want to say?

Your current search criteria is: Objects is "Sometimes I Want to Kill the President [from the Exit Art Print Portfolio, Expose]".