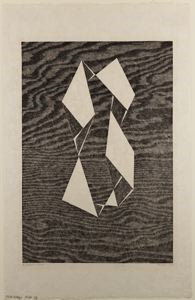 
Object Type: Works on Paper
Creation Place: North America, United States
Medium and Support: Woodcut print on paper
Credit Line: Museum Purchase
Accession Number: 1946.29
Arriving from Germany in 1933 after the Nazis had forced the closing of the advanced Bauhaus School in Weimar, Albers was one of many foreign artists to resettle in America. He distinguished himself at Black Mountain College in the 1930s and 1940s and at Yale University during the 1950s and 1960s as one of the most influential teachers of the twentieth century. Through him, many future artists were introduced to Bauhaus concepts. His art, in the Bauhaus tradition, was devoid of associations and based entirely on formal relationships between color and shape. Albers became a master of this geometric abstraction, continually exploring the subtle potentials of color when used in pure geometric formats. Albers was recognized again when his studies on solor interaction reeemrged in the Op and Minimal art of the mid-1960s.
Exhibition List
This object was included in the following exhibitions:
Dimensions

Your current search criteria is: Objects is "Astatic".