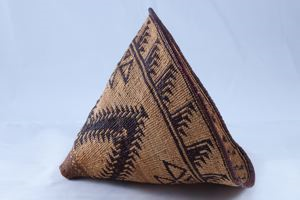 Design: For the design in the top band, Iâve seen this described in other sources as the flying geese design, Kroeber describes this on 121-122 as a variation on the foot design or umetsqaa in Yurok.

Structure: So similar to 1969.71 might be good to relate in some way, this one is a little bit smaller. It is what is typically called a burden basket for gathering. Can also call it a gathering basket or a conical basket. Has lots of residue inside as well as staining, maybe from use with acorns or other food from gathering. This one has a hole at the top edge, punched through (see photos), could have been nailed to a wall or hung from here. No clear markers of carrying strap or any kind of strings. Itâs a little warped in structure, from age or use, but also very strong and sturdy, a good warp foundation