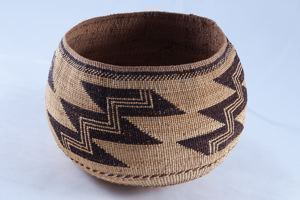 Design: The design is a variation on the flint and snake design, looks just like the one on Kroeber page 129-131. Kroeber says in Karuk it is called vakaixara, corresponding to the Yurok snake design, most seen in association with the flint design. This is supposed to be a very hard design to do.

Structure: This basket has a lot in common with 1997.14.6. I would put this in the âfancyâ or âtrinketâ basket category, partially because of the size (itâs not a classic storage basket), and also because itâs not the right shape or style to be a hat, bowl or tobacco basket. The weave of the bottom is interesting, it is starting out with a looser weave and wider warp and weft materials and progressively gets smaller and tighter in the materials and weave. Maybe itâs just easier to start that way or theyâre using the bigger shoots to make a stronger bottom. I actually canât 100% tell if the weaver used bigger warp shoots at the base or maybe was just twining around 2 thinner shoots at the base and then separating them more toward the body of the basket to form a tighter weave. There is not a lot of evidence of use or wear on this one and it feels super strong - the base helps provide that strength for sure.