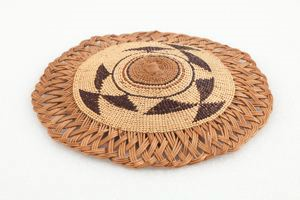 Design: This basketry plaque has a similar 3 triangle design to 1948.50, which looks like another waxâpoo variation. It actually looks quite like the one on page 129-131 of Kroeber, which he describes is an apxankoâikoi design of the Karuk

Structure: This is a plaque or a wall hanging, like you might display a plate or other flat decoration on a wall. Itâs a mid-2oth century innovation of Hupa, Yurok, and Karuk weavers in NW California. Weavers would have to start with pretty long and thinner warp sticks of willow or hazel (likely willow as young willow shoots would be very flexible) because itâs the warp sticks that actually loop around to form the plaited edge. Itâs a pretty similar start/button to the basketry caps of this region, but it just doesnât continue into the body of the hat. Maybe some hat weavers developed this style? Itâs just the right size for that. The edging is almost all 3 strands together, except in one part where its 5 strands, maybe thatâs where you would hang it, the strongest part? There is some damage and small breaks throughout the edging.