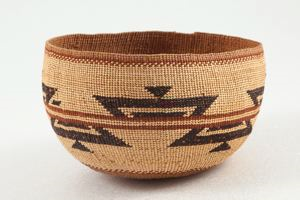 Technique: Twined basket. Itâs fully covered in overlay which makes me think itâs not a bowl, but it could just be another âfancy basket.". It is dominantly a bear grass background with woodwardia stripes and a maidenhair design overlay. The interior is really clean with no overlay, making it a half-twist overlay.

Design: Looks like another waxâpoo variation, looks quite like the one on page 129-131 of Kroeber, which he describes is an apxankoâikoi design of the Karuk that corresponds to the waxâpoo of the Yurok. He notes that the word apxan in Karuk means basketry caps, and the second part, koikoi seems to mean up down, up down referring to the style of the pattern. Sometimes called a friendship design. It does have a slight lifeline at the top but doesnât have one at the brim, and that threw me a little initially.

Structure: There is some fragment/knot on the edge that looks like rope not plant material, possibly from hanging for display.