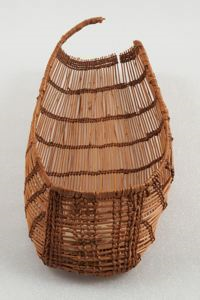 
Object Type: Baskets
Creation Place: North America, United States, California
Medium and Support: Hazel or willow warp shoots, probably hazel; bear grass for the edge
Accession Number: 1985.4.3
Size: This is the one of the two miniature baskets in the collection.

Design: These baskets are much less decorative because kids grow out of them so quickly and theyâre more susceptible to damage if they get heavy use, so there isnât really a design element in terms of an overlay pattern.

Structure: This one is also very small for a baby basket, likely it was also a model or for sale or even a toy/for dolls. It looks a lot rougher, less perfect. The edging is much less neat than the other miniature baby basket, like it was made much more quickly (maybe lends to it being for play over display). The handle has also taken a lot of damage (much like the larger ones that would have been the size to be used. There is also some damage to the interior sticks as well which could also lend to it being a toy. At some point it was handled a lot and not just left alone hanging on a wall.

Cultural affiliation notes: The record says Hupa, and this seems accurate. This is very much in the style of the Hupa, Yurok, and Karuk baby baskets in NW California, and I most commonly see these labelled Hupa.

Your current search criteria is: Objects is "California Hupa cradle".