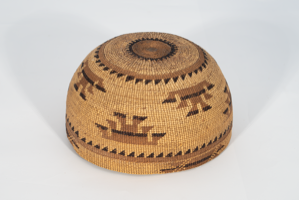 
Technique: Twined basket. Combination of full and half twist overlay. The overlay is predominantly bear grass on the background but with maidenhair accent lines and then the weaver seems to have reversed the bear grass and conifer root overlay for the frogâs foot design portion so that the design shows the conifer on the exterior and the bear grass shows on the inside, pretty unusual technique.

Design: The are lifelines and the 3-section division present in the design. This cap has a frogâs foot design (8 in totally), usually expect to see odd numbered. The brim then has a different design for that 3rd section, which looks like a flint variation and it is really unusual to not duplicate the body design again on the brim, so this stands out to me.

Structure: Same size as 1981.10.1 and very similar, could it be the same maker? Would be good to relate these. Really incredible weave, very tight and strong with a very flat top. There is a lot of wear on the top, perhaps from being stored like a bowl. It has an evenly clipped and finished edge. There is some staining, perhaps from use or wear but there are no visible hairs stuck inside.

Cultural affiliation notes: A classic Hupa, Yurok, and/or Karuk ceremonial cap. Similarly, to some others this hat seems a bit âoffâ in the even numbered design, the unique overlay style, and switching to a different design on the brim, perhaps it was meant to sell. The label on it says, âsquaw cap c. 1900 with a $300 value.â Iâve recommended not using the word squaw going forward. But the price is interesting, because that would be a big price circa 1900. That is definitely the price hats were selling for in the mid 20th century.