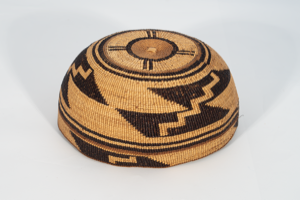 Design: Looks like another version of the flint (in Yurok VEniigemaa) and snake design on page 126-130. 3 flint designs, very classic looking. Lifelines and divisions in design also present.

Structure: It has some wear and staining that make it appear older and more worn. This weaver was incredible, it is a fine and tight weave, super well done. The top is flat and straight with no warping at the button, as is pretty common. No visible hairs in this one. The edging is clipped and even, with some slight damage at one part of the rim.