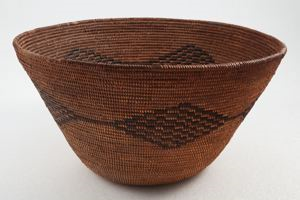 
Object Type: Baskets
Creation Place: North America, United States
Medium and Support: Plant fiber
Credit Line: Found in Collection
Accession Number: 1969.72
Mission typically is used to refer to baskets from Southern California communities along the coast of California, where the Mission system operated at the time of invasion. From the University of Oregon Museum: "The term âmissionâ was first designated by A.L. Kroeber in 1922 in reference to a style of baskets made by people subjugated under the Franciscan mission system, c. 1769-1834. As Art Historian Yve Chavez (Tongva) points out, this term effectively compresses the discrete artistic traditions of a number of Native peoples into a single overarching group."