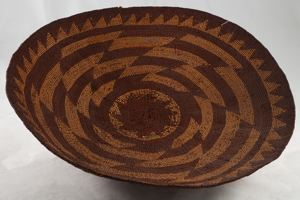 Design: A variation on the classic flint design most likely. I couldnât really figure this design out completely from Kroeberâs pattern mapping, but it does look like some of the repetitive flint designs on page 122. Itâs a much more simple design than the heavily overlaid hats or trinket baskets, or even the other trays. It much more resembles the style of cooking baskets and acorn soup baskets in many ways with the plain conifer root and minimal bear grass overlay. That makes me think this was used in food preparation.

Structure: On the edge there is evidence of a tie or string that looks like sinew, itâs not plant material, possibly for hanging? This tray is a slightly different weave than the tighter twining of the hats or the other tray. There are much larger warp sticks so itâs a âwiderâ weave but that makes it very strong and less flexible, so it doesnât actually have the same kind of outer support sticks as the other tray. Itâs the same size and shape as the gambling tray but I would so bet this is more about food preparation, see note on design. I think this is probably a flour tray. Itâs very oily and has lots of residue, particularly the edges but the interior as well from handling, like twisting and spinning while holding onto the edges to sift flour. On the exterior there is one remaining stick fragment still attached using plant materials, making me think itâs original to the piece and not a later repair like on the other tray. Did it formally have more support rods on the outside?

Cultural affiliation notes: The record states âKarokâ and I think it would be accurate to assume itâs Karuk. Very much matches the style of this region but Iâd be curious how the donor came to know it was Karuk instead of Yurok or Hupa, perhaps they knew a little more about where they acquired it. Flour/acorn sifting baskets in the Karuk alphabet were called ÃUN-TÃP-RUV.