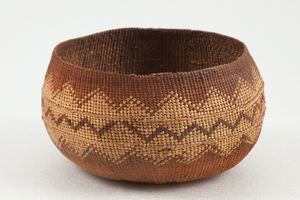 
Object Type: Baskets
Creation Place: North America, United States, California
Medium and Support: Hazel or willow warp shoots, very likely hazel; conifer root weft; bear grass overlay
Credit Line: Found in Collection
Accession Number: 1969.89
Technique: Twined basket. Half-twist overlay, no overlay shows through to the interior. Only bear grass is used as the overlay which is notable since the other overlay materials (ferns) would break off more with too much repeated water exposure â and this is a bowl for eating acorn soup/mush. The weft is conifer root with a really tight weave to hold liquid and the warp sticks are probably hazel for added strength. The interior is so smooth and well cleaned, it would have to be to eat out of.

Design: The two raised sticks on the outside (a willow shoot woven in with bear grass overlay) are big indicators for this type of acorn soup basket and add strength to the shape as well as a distinctive design element. The design done in bear grass is a common simpler geometric pattern seen on the baskets. Usually, but not always, on these cooking and eating vessels the bear grass design is split through the center with the two woven lines and is a continuous pattern around the center.

Structure: This is an acorn soup basket for eating out of. There are so many wear marks on rim and interior/base - this was almost certainly used. Itâs a bowl as opposed to the actual cooking basket which would be bigger (look at 1948.57 for an example of a cooking vessel). The bowl also curves inward more at the rim. Itâs SO strong - Iâve rarely felt baskets this sturdy - and it has such a tight weave. Itâs very watertight, which is enhanced by all the residue from cooking creating kind of a caked in sealant. It is very oily on the exterior with a lot of wear from handling on the rim and the outside

Cultural affiliation notes: The record states, âHupa food basketâ and I think it would be accurate to assume thatâs correct. Very much matches the style of this region, but Iâd be curious how the donor came to know it was Hupa specifically, perhaps they knew a little more about where they acquired it. Some other acorn soup basketry bowls from this region in the MCAM collection include 1948. 51 and 1969.86. Acorn soup baskets in the Karuk alphabet were called PÃT-TU-ROV.