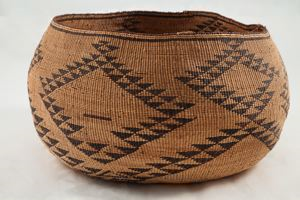 Design: Variation on the waxâpoo design done in fern overlay.

Structure: I see some hairs stuck in the sides. It is beautifully woven, strong and has a perfectly flat bottom all of conifer â hard to achieve. This one likely would have been used because it is the right size and has so much wear. There is one area of the sides with lots of damage, but other than the one area of damage itâs actually a very strong basket. Itâs a strong weave certainly, but it has started to flex and give in places over time. The inside is a bit rougher with all the overlay ends peeking through. It seems generally pretty aged too (at least 70 years but maybe a lot more), the plants seem older and less shiny. This basket has lots of staining from oils and rubbing marks from handling. There are some rope fragments on the rim, possibly from carrying or hanging straps, right near the damaged area so this could be related to that wear from handling by the straps.

Cultural affiliation notes: The record states, âlower Klamath River storage basketâ and I think it would be accurate to assume that refers to the area close to the mouth of the Klamath, the NW corner of California home to the Hupa, Yurok, and Karuk communities. This very much fits the basketry style and materials of that region. Storage baskets in the Karuk alphabet were called C+Â´P-NOK-MÃ-YON-NUR or sipnuk.