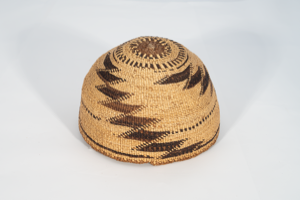 
Object Type: Baskets
Creation Place: North America, United States, NE California, Oregon border
Medium and Support: Possibly Tule warp and Conifer root weft. Bear grass and fern for the overlay.
Credit Line: Gift of S. O. Johnson
Accession Number: 1948.49
Technique: Twined basket. Full twist overlay. Overlay is fully visible on the interior and the interior is much rougher than on many other hats. Likely conifer root base weft with bear grass overlay. The darker overlay material is the style of maidenhair fern but itâs not shiny enough. It is likely another fern or a dyed root. The black fern material is so uneven in color, possibly indicating itâs not dyed. The overlay is very tight and finely done.

Design: Despite it not matching the Hupa, Yurok, Karuk hat styles completely - it is still sort of divided into those three sections. The design is also very like the flint designs in those caps. Itâs divided into three design sets, which fits the convention of odd numbered designs. There are also similar striped designs to 1948.36 at the crown. It could be a variation on the sturgeon back and/or flint design described by Kroeber on page 122-124. There are parallelogram versions of the sturgeon back (qaxkwilee in Yurok) design like this, but it most commonly looks like a simpler flint design.

Structure: There are big hairs stuck inside and some stuck on the edge as well. Same woven edge finishing technique as the more inland caps like 1948.36. This one has a lot in common with 1948.36 structurally, and itâs from the same accession so these are likely related in some way - perhaps the same maker? I would definitely relate these somehow.

Cultural affiliation notes: This does not look Hupa, Yurok, Karuk, though there are similar design and material conventions. The start/center/button is too different, itâs quite a bit deeper than expected for their hats, the black overlay material is also different, and the edge finishing is different. The weave is rougher too, not as fine. Also doesnât have the three sections or design conventions of the more coastal caps. I think itâs likely from a nearby but more inland community like Klamath/Modoc, Astarawi, etc.