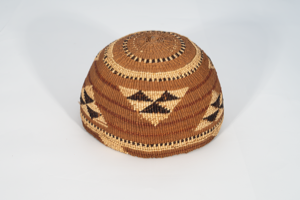 Technique: Twined basket. Half-twist overlay, no overlay shows through to the interior. Itâs a âred hatâ meaning its predominantly woodwardia fern dyed with alder bark as the overlay, but this one actually looks like itâs all conifer root background with no overlay (not typical in ceremonial caps) with a couple of woodwardia stripes plus maidenhair and some bear grass in other parts of the overlay.

Design: The design looks quite like the one on page 129-131 of Kroeber, which he describes is an apxankoâikoi design of the Karuk that corresponds to the waxâpoo of the Yurok. He notes that the word apxan in Karuk means basketry caps, and the second part, koikoi seems to mean up down, up down referring to the style of the pattern. Itâs a little odd that there are 6 designs (usually meant to be odd numbers). This cap is beautiful, but you can tell after close looking that itâs a little âoffâ in some ways perhaps indicating it was made for sale or trade (the design, the materials), some weavers might say this is ânot ideal,â especially because itâs not all overlaid.

Structure: This cap is less âperfectâ, though, it seems like maybe the weaver was less experienced because it is a bit rougher and more warped than typically expected. It has a clipped warp edge. The lifelines are very pronounced, with a stick woven in which makes me think it is probably Karuk because thatâs one of their indicators, plus the âred hatsâ being more likely Karuk. There are no hairs on this cap that I could see.