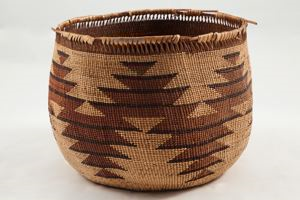 
Object Type: Baskets
Creation Place: North America, United States
Medium and Support: Hazel or willow warp shoots; conifer root weft; woodwardia fern dyed with alder bark, bear grass and maidenhair fern overlay materials
Credit Line: Gift of S. O. Johnson
Accession Number: 1948.34
Technique: Twined basket. Half-twist overlay, no overlay shows through to the interior. The bear grass overlay is the background color, with woodwardia and maidenhair ferns for the design overlay. The top rim is about Â¾ in of open work exposed warp before the finished edge wrapped in overlay material (bear grass). It looks like this style of open work rim baskets finish the same way, and just leave the warp shoots longer instead of clipping them right at the end of the weft twining.

Design: The open worked edge is notable here as it seems like it was a special technique some weavers did for sale baskets. The design is a variation of the waxâpoo design. I also found it notable that the weaver combined the woodwardia and maidenhair in this way for the design as itâs not something you see as often â the woodwardia being the dominant design element on a bear grass background.

Structure: I would put this in the âfancyâ or âtrinketâ basket category, partially because of the open worked edge decorative element and also because itâs a little small for storage. You donât really see that edging on the heavily used storage baskets (itâs too fragile of an edge). Itâs really lovely and delicate though and wouldâve been popular for sale. There is some damage to the edge, but it does allow you to see the technique of the edge better under the bear grass. The base is all conifer root, no overlay, and the shoots used to weave the base are much bigger for a very strong bottom. This one is still the shape and style of a classic storage basket, though a bit smaller.

Cultural affiliation notes: The record states, âlower Klamathâ and I think it would be accurate to assume that refers to the area close to the moth of the Klamath, the NW corner of California home to the Hupa, Yurok, and Karuk communities. This very much fits the basketry style and materials of that region.