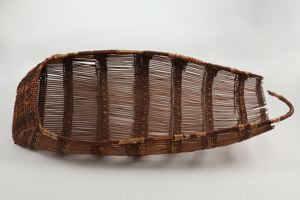 Technique: Open weave twined basket with some bear grass overlay on parts of the horizontal bands on the exterior and on the rim/edge.

Design: These baskets are much less decorative because kids grow out of them quicly and theyâre more susceptible to damage if they get heavy use, so there isnât really a design element in terms of an overlay pattern.

Structure: This baby basket seems almost too big, but maybe for a small toddler with some blankets it wouldnât be too roomy. I have read in a few sources that parents used to stuff the bottom (the handle is the top) with some moss to act as a natural diaper and little cushion for the baby to sit on. There are good images in sources like Bibbyâs Essential Art. There would have been straps woven through to hold the baby in, thatâs why itâs such an open weave, also keeps it light. The handle is damaged maybe from heavy use, and some interior sticks are also damaged, maybe from weaving straps through. This one seems pretty sturdy, much more reinforced with the horizontal bands since theyâre a lot wider and use more material than the smaller baby baskets. Itâs for a bigger child with more weight, so it needs to be stronger. There is some residue and oily wear indicating handling and potential use over time.

Your current search criteria is: Objects is "Klamath woven basket".