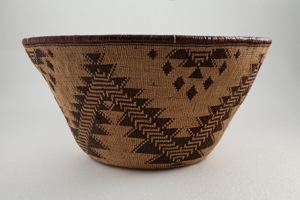 Design: The central portion looks like a variation on the waxâpoo or friendship design combined with one of the stripe or snake patterns (since it zig zags), very similar to 1969.71 design. Would be god to relate these two somehow. The design looks exactly like the basket on page 33 from the Bowers Museum (see citation).

Structure: The structural elements are also so similar to 1969.71, and that one was FIC but theyâre so similar in design that it could maybe be from the same accession or community? I would likely classify this one as a cooking basket. Itâs plenty big enough and has a big wide opening for cooking. There is also and there is lots of residue inside, which looks like the residue from the acorn soup bowl in the collection. Itâs SO strong and sturdy, which it would need to be if it is a cooking basket. Cooking would be done by putting for example, the acorn mush mixture in the basket, heating up very hot stones over a fire and then adding them to the mixture and stirring so as not to burn the basket with the hot stones. I think itâs more likely cooking usage than storage due to the wide mouth (the opposite shape, teardrop tapered in at the top, used in many storage baskets in Northern CA). There is some slight damage to the rim.

Cultural affiliation notes: The record just says Klamath and there is some ambiguity here about whether that means lower Klamath River groups like the Hupa, Yurok, and Karuk - or NE California Klamath region groups like the Klamath/Modoc, Pit River, Shasta, etc. This is very much more in the inland style in my view. Could still say âKlamathâ but specify Northeast/inland style.