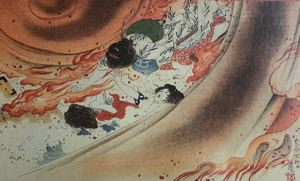 Reverberations: Japanese Prints of the 1923 Kanto Earthquake is curated by Deborah Stein and the Mills College Museum Studies Workshop. According to the Stein, âReverberations is a collective effort to examine how art and natural disaster intersect in complex ways. Over the course of nine months, I worked with a team of dedicated students to research an unknown and unpublished set of prints in which we discovered a powerful response to a horrendous catastrophe.â The Japanese woodblock prints featured in Reverberations were created in response to the great Kanto earthquake that took place on September 1,1923, devastating many cities in the Kanto region of Japan, including Tokyo, Yokohama, and Chiba. Immense fires aided by strong winds engulfed the cities and destroyed lives, homes, and businesses in a matter of days. After the earthquake and its aftershocks had abated and the fires were quelled, the surviving citizens had to rebuild their lives in the wake of their ruined cities. The Kanto earthquake was a significant part of the history of woodblock prints in Japan, as many print shops, including the famous Watanabe print shop, lost their respective equipment and blocks from the quake and fire. Like the rest of the citizens, artists and publishers had to begin anew. In the years following the earthquake, artists created works to document the disaster, as well as the rebuilding of their cities.

The prints featured in this exhibition were commissioned as a set to be executed by a number of different artists. These works convey multiple levels of emotion and a visceral intensity. As an historical and art historical reference to life and art in modern Japan, the works exemplify a wide variety of print styles and practices during the Taisho Era. This visual response to natural disaster constitutes a record of despair and renewal specific to this period; yet, it is also a strikingly familiar record of human suffering and survival that resonates with the Bay Areaâs own experience with destruction wrought by earthquakes. Reverberations offers insight into tragedy and loss, making available experience of disaster in a way that scientific data and photographs cannot.

Your current search criteria is: Exhibition is "Reverberations: Japanese Prints of the 1923 Kanto Earthquake".