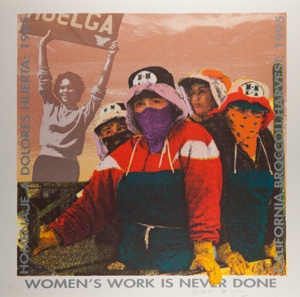 Featuring works from Mills College Art Museumâs permanent collection, Shifting Perspectives is a digital exhibition examining contemporary artistsâ critiques of traditional visual representations of race, culture, and gender. Using subversion, resistance, and satire, the artists in the exhibition confront systemic sexism and racism to bring attention to power dynamics and socio-political issues. The works in the exhibition reflect the subjective experiences of the artists themselves and the identities they embody.

A lynchpin of the exhibition is work by the Guerrilla Girls, an activist group of women artists who target tokenism and sexism within the artworld. Their interest in the underrepresentation and objectification of womenâin particular, women of colorâis echoed in the works of Faith Ringgold, Shahzia Sikander, and Mona Hatoum, which reclaim the female body while subverting cultural stereotypes. While the exhibition includes biting political satire by The Bruce High Quality Foundation and early 20th-century Mexican printmaker Jose Guadalupe Posada, many of the works in Shifting Perspectives express empathy and agency. Yolanda Lopezâs print celebrates the important role of Chicana women in labor unions, while the documentary photography of Pirkle Jones and Russell Lee reveals economic realities and disparities for Mexican immigrants in the United States. Many of the works have a timeless quality, such as Carrie Mae Weemsâ plate commemorating every black man who lives to see twenty-one, which is as relevant today as it was when it was made in 1992.

Shifting Perspectives also features brand new acquisitions, including prints by local artists Adrianna Adams, YÃ©tundÃ© Olagbaju, and Daniel Valencia, and Guillermo Galindoâs graphic score based on the movements of a lost child which are embroidered onto a flag used along the U.S./Mexico border to indicate the location of water tanks for migrants. The recent additions are the result of a newly launched student acquisition project to identify, research, and justify specific artworks that help diversify MCAMâs permanent collection.

Shifting Perspectives is curated by Simone Gage, Sage Gaspar, Sydney Pearce, Melika Sebihi, and Taya Wyatt. The exhibition is accompanied by a digital catalogue featuring original scholarship by the students.

Commemorating Every Black Man Who Lives to See Twenty-One 2013.5.6

Sometimes I Want to Kill the President [from the Exit Art Print Portfolio, Expose] 2012.13.3.b

Your current search criteria is: Exhibition is "Shifting Perspectives".