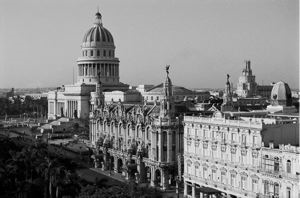 A Havana native and tireless traveler, Vivian Stephenson returned to Cuba in 1999 and 2002 after a long absence, writing, with her Nikon 80, a four hundred-year history of Cuba in pictures. In this exhibit Stephenson offers us a splendid series of photographs of the cities of Havana, Trinidad, and Sancti-SpÃ­ritus. Founded early in the sixteenth century, among the first seven colonial towns ("villas") set up in Cuba by the Spanish, the architecture of these three cities is today not only a testament to centuries of history but is also part of our human heritage. What Stephenson has done in her photographs is precisely to document the most important architectural treasures of these three cities. Among her photos we can find forts, palaces, churches, plazas, civil buildings, and even a ruined sugar mill. Viewing these photographs is like going back in time. As in Alejo Carpentier's short story, "Voyage to the Seed"âa tale told backwards, unexpected, full of subtle shadings and of great discoveriesâthese photos are a trip to the beginnings, a round-trip path seen through Stephenson's eyes. Past and present become two sides of a reality in which we take part. A trip inward, toward stone and wood, toward the wall, the sentry-box, the grille, the wrought-iron grating, the doors and gates, the star-shaped latticework and the lacy wood frames and ceilings, toward galleries of inner patios and balconies, toward columns, rounded arches and art-glass windows, all part of a rich mÃ©lange of materials, forms, and styles.

A resident of San Francisco, California, Vivian M. Stephenson has a BA degree in mathematics from New York University and an MBA from the University of Havana. She also received an honorary Doctor of Humane Letters from Mills College in 2005. In 2004, Ms. Stephenson was a co-recipient of the Kile Ozier Award for volunteerism in the fight against HIV/AIDS. She has been named one of the San Francisco Business Times â100 Most Influential Womenâ in the Bay Area.

Carlota Caulfield is a poet, literary critic and translator. She earned a Licenciatura in History at the University of Havana, a M.A. degree in Spanish and Latin American Literature at San Francisco State University, and a Ph.D. in Spanish at Tulane University, New Orleans. Born and raised in Havana, since 1992 she has made her home in the Bay Area.

Your current search criteria is: Exhibition is "Cuba: Beauty and Decay. Photograhs by Vivian M. Stephenson with texts by Carlota Caulfield".