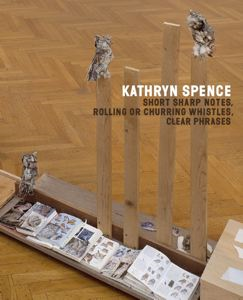 Kathryn Spence: Short sharp notes, rolling or churring whistles, clear phrases features new work by the Bay Area artist, including large-scale sculptural installations and drawings inspired by the confluence of natural and urban environments. Spenceâs sculptural objects are inspired by animals and nature but are composed from the discarded materials of the human world. Her work demonstrates an uncanny ability to capture the essence of animals without masking her found materials, applying a naturalistâs methods to urban detritus. Accumulated bits of fabric, thread, paper, and cardboard take on species-specific characteristics of songbirds, owls, and coyotes. Spenceâs exhibition at the Mills College Art Museum will include new sculptural work that brings together many of the significant elements of her artistic practice. Spence collects humble, common materials--such as thread, old stuffed animals, fabric, images from birding field guides, and wireâthat are carefully selected for their color, texture, and associations. She then uses the material to create meticulously stacked and organized accumulations that are both a monument to the impulse to organize and a method of rehabilitating materials that have been cast aside by a consumer society. Drawing plays an important role in Spenceâs work and the exhibition includes a large floor-based work on paper that expands the artistâs use of drawing in both scale and concept. A collage of abstract color imagery, the piece demonstrates Spenceâs accumulative procedures deployed toward more formally abstract ends. Spence has described the objects she makes as dimensional drawings and her technique of accumulating, attaching, layering, and lining are the very procedures that animals use to build up their own nests and shelters. Spenceâs installations emulate the living animals and other items and elements she observes in nature, and explore the disparity between the culture of the artificial and the untamed natural world that surrounds us.