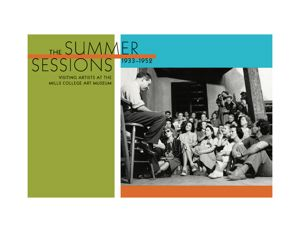 The Summer Sessions 1933â1952: Visiting Artists at the Mills College Art Museum, curated by Dr. Stephanie Hanor and students in the Mills College Museum Studies Workshop demonstrates the extraordinary history of artistic innovation at Mills College. The exhibition examinea the museumâs significant role in the introduction of European modernist artists and their practices to the San Francisco Bay Area during the period surrounding World War II. From 1933 to 1952, under the direction of the noted German art historian Alfred Neumeyer, the Mills College Art Museum participated in the âSummer Sessions,â a series of classes and workshops in which distinguished contemporary European, Latin American, and American artists were invited to the College to teach and exhibit work. The museum was a pioneer in its choice of avant-garde artists for the Summer Sessions program, which included sculptor Alexander Archipenko; painters Max Beckmann, Lyonel Feininger, and Fernand LÃ©ger; and Latin American artists Antonio Sotomayor and JosÃ© Perotti. In the summer of 1940, faculty members from the School of Design in Chicago, the newly reformed Bauhaus directed by LÃ¡szlÃ³ Moholy-Nagy, designed and taught that yearâs Summer Session. As a direct result of the program, the museum organized the first exhibition of Feiningerâs work in the United States (1936) and major exhibitions by LÃ©ger (1941), Moholy-Nagy and the Bauhaus (1940), and Beckmann (1950).

Using approximately 40 paintings, photographs, prints, and drawings from the museumâs collections and archives, the Summer Sessions exhibition will provide new scholarship on the role these artists played in Northern California, describe a vital chapter in the history of the Mills College Art Museum, and expose new audiences to an important group of works in the museumâs permanent collection. The Museum Studies Workshop is a course taught in the Art History Program at Mills College encompassing both the theoretical and practical study of museums in historical and contemporary contexts. The members of this yearâs class are: Alyssa Ilves, Mia Malotte, Elizabeth Mauerman, Jennifer Nicholson, Meri Page, Rachel Reyes, Hazel Rogers, Mika Rosen, and Jessica Tang.

Your current search criteria is: Exhibition is "The Summer Sessions 1933-1952: Visiting Artists at the Mills College Art Museum".