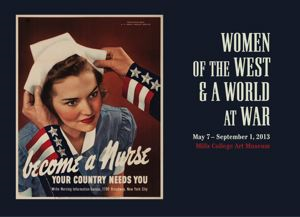 Women of the West & A World at War

Women of the West & A World at War, an exhibit organized by the students of History 12: The West and Its Cultural Traditions Part 2, is curated by Kiaonno Bradley, Leah Holtz, Montana MacDonald and Chandra Yang, under the direction of Professor Bert Gordon and Mills College Art Museum Director, Stephanie Hanor. Using works selected by the History 12 students for their research projects, the curators have put together an exhibit showcasing works from the collection of the Mills College Art Museum. Spanning the 17th to the 20th centuries, the objects in the exhibition relate to women in the workplace and the World Wars, with additional objects focused on health, education, or fashion in the Western world. While one goal of the research project is to delve into the cultural significance of the object in its time and place of creation, as well as its use or display, another goal is demonstrating how the students themselves connect to their chosen object. The curators hope that viewers gain not only a greater understanding of the time period and the objects picked, but like the students, gain a deeper appreciation for the personal side of history and objects of âbygoneâ eras.

Selections from Women of the West & A World at War are on view in the lobby of Vera Long. This project is made possible through support of The Andrew W. Mellon Foundation.

Drawing From Life at the Royal Academy, (Somerset House), after Thomas Rowlandson 1957.18

Your current search criteria is: Exhibition is "Women of the West & A World at War".