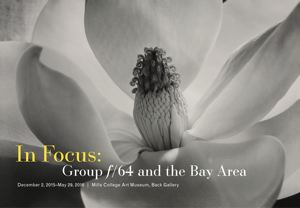 In Focus: Group f/64 and the Bay Area

The exhibition showcases MCAMâs unique holdings and demonstrates the connections between Mills and this pioneering group of photographers. In Focus features images taken on Millsâ campus as well as portraits of innovative visiting artists and faculty, including musician Henry Cowell and muralist Diego Rivera. Work in the exhibition also demonstrates the influence of Albert Bender, the San Francisco philanthropist who helped found MCAM in 1925 and who financed Ansel Adamsâ first portfolio of photographs. The selected photographs highlight iconic modernist images, including botanicals by Imogen Cunningham, as well as more unusual examples of the artistsâ work, such as early portraits by Ansel Adams.

The group exhibited together in 1932 at the M.H.de Young Museum in San Francisco. Their name, f/64, was taken from the smallest lens aperture on their large format cameras, which allowed them to capture the greatest possible depth of field in order to create sharply detailed prints. Revolutionary in their day, Group f/64 was one of the first modern art movements equally defined by women. From the San Francisco Bay Area, its influence extended internationally, contributing significantly to the recognition of photography as a fine art.

Your current search criteria is: Exhibition is "In Focus: Group f/64 and the Bay Area".