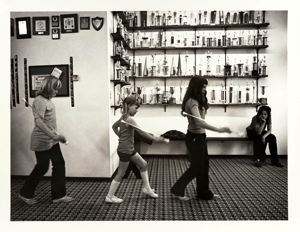 Featuring newly acquired work from the Mills College Art Museumâs collection, this exhibition is the first by the Bay Area photographer to highlight his photographs of women and girls. Internationally recognized for his depictions of Northern California suburban life in the 1970s, Owensâ images demonstrate his interest in documenting ordinary people. A subset of a larger body of work, these photographs of girls and women raise questions about the role of women in the early 1970s, the importance of community and social organizations, and the cultural differences between suburban and urban parts of the greater Bay Area during that time period. Like a visual anthropologist, Owens astutely recorded the customs, symbols, and social relationships that characterized American middle-class culture in the 1970s. Owens was a photojournalist for the Independent, a local newspaper in Livermore, California, and on weekends documented his surroundings with the clarity of an insider. His photographs document more than ordinary events, capturing the aspirations and realities of being female in suburban society.

Bill Owens: Suburbanites and Socialites is curated by Mills College undergraduates Meghan Adkins, Melissa Mize, Sadie Padial, Clare Schneider, Sophie Sterling, and Veronica Sutter. Their essays in the accompanying exhibition catalogue reflect their interests and questions about these photographs from the vantage point of women in the 21st century. The works in the exhibition are from MCAMâs permanent collection and are a recent gift from Robert Harshorn Shimshak and Marion Brenner.

Bill Owens was born in San Jose, California in 1938. He was the recipient of a Guggenheim fellowship in 1976 and two National Endowment for the Arts grants. His photographs have been exhibited internationally and are held in numerous museum collections including: The Museum of Modern Art, New York; Berkeley Art Museum; Los Angeles County Museum of Art; San Francisco Museum of Modern Art; Los Angeles Museum of Contemporary Art; and the Getty Museum in Los Angeles. His photographs have been published in the books, Suburbia, Our Kind of People, Working, and Leisure.

Your current search criteria is: Exhibition is "Bill Owens: Suburbanites and Socialites".