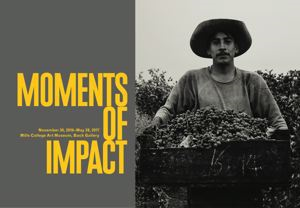 Featuring works from the Mills College Art Museumâs collection, Moments of Impact examines ideas around environmental and social justice. The exhibition includes both contemporary and historical works in a wide range of media and explores the ability of objects and artists to evoke questions around cultural appropriation, inequality, and agency. The exhibition examines moments of cultural impact from the environmental and cultural domination of indigenous people and their lands to the continued struggle for civil rights in the United States. Some of the featured artists, such as Carrie Mae Weems, Yolanda Lopez, and Rashid Johnson, blur the lines between activism and art by making politically charged work that is directly engaged in the issues of our time. Other works by photographers Robert Heinecken and Iain Baxter can be seen as more abstract reflections on the erasure of identity.

Environmental and social extinction is explicitly addressed in Clayton David Pinkertonâs anti-nuclear war poster while the works of Kathryn Spence, Stephanie Syjuco, and Pae White illuminate the tenuous juncture between humans and nature. Whether overtly activist or not, art can play a powerful role in helping us understand such issues as the extinction of species, water rights, e-waste, and the histories of land usage. Moments of Impact demonstrates the myriad ways art can help build awarenessâthe first critical step in changing our collective story from one that exploits and destroys to one that coexists, nurtures, and values.

Commemorating Every Black Man Who Lives to See Twenty-One 2013.5.6

Sometimes I Want to Kill the President [from the Exit Art Print Portfolio, Expose] 2012.13.3.b

The Raising of the American Flag and Taking Possession of California by Commodore John Drake Sloat, U.S. Navy - at Monterey, July 7, 1846 1923.8

Thurgood in the Hour of Chaos [from the Exit Art Print Portfolio, America, America] 2012.13.4.e

Your current search criteria is: Exhibition is "Moments of Impact".