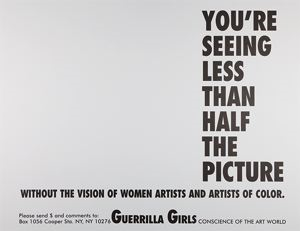 You're Seeing Less Than Half the Picture

Youâre Seeing Less Than Half the Picture explores the role artists have played in helping us understand institutional authority and how choices are made regarding what we see in art museums. Using the progressive feminist art work of the Guerrilla Girls as a touchstone, the exhibition features both contemporary and historical works from MCAMâs collection that surface complex dialogues around representations of gender, race, and sexuality. Taking its title from the 1989 Guerrilla Girls poster Youâre Seeing Less Than Half the Picture Without the Vision of Women Artists and Artists of Color, the exhibition questions the lack of diverse narratives in cultural institutions by foregrounding the work of traditionally underrepresented artists. Some of the featured artists, such as Fred Wilson, Bonnie OâConnell, and Faith Ringgold, blur the lines between activism and art by making politically charged work that is directly engaged with the underlying power dynamics of display practices. Other works by Ruth Bernhard, Elizabeth Ginno Winkler, and Shi Tou can be read as more covert reflections on self-determined identities and art as social commentary. Whether overtly activist or stealthily subversive, the work in the exhibition demonstrates the myriad ways artists can expose us to multiple points of view by challenging curatorial authority and reprioritizing whose work is represented in museums.

Your current search criteria is: Exhibition is "You're Seeing Less Than Half the Picture".