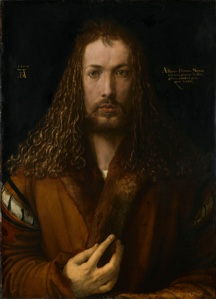 German, (1471–1528)
Albrecht Durer (May 21, 1471 - April 6, 1528) was a German printmaker, painter, humanist, and theorist of the German Renaissance. His knowledge of Italian art and principles of mathematics, perspective, and ideal proportions influenced Durer to incorporate Classical ideals into his figurative works, such as his engraving print Adam and Eve (1507). Durer revolutionized printmaking and painting and is considered to be one of the most important figures of the Northern Renaissance.

Born in Nuremberg, Germany, Durer trained as an engraver from a young age and began to receive commissions regularly in his early 20s. He then went on to create significant altar pieces and portraits of patrons including Holy Roman Emperors Maximilian I and Charles V. Durer was also a supporter of Martin Luther and the Protestant Reformation, and contributed to the politicized prints in circulation that were critical of the Roman Catholic Church, though he was in communication with the major Italian artists of his time and had a great appreciation for the history of Italian art. Aside from being a prolific printmaker, Durer was a skilled painter, as is made apparent in such works as his iconic Self-Portrait at Twenty-Eight (1500).

Durer died at the age of 56 in his hometown of Nuremberg, Germany in 1528.

Annunciation - from The Little Woodcut Passion (The Small Passion) 1956.9

Facsimile: Archangel Michael and the Devils 1938.272

Facsimile: Four Horsemen of the Apocalypse 1938.172

Facsimile: Seven Golden Candles and the Stars of the Apocalypse 1938.185

Portrait of Albrecht Durer as a Young Man, after Durer's Self-Portrait 1962.5

The Small Passion (Die Kleine Holzschuittpassion): Expulsion from Paradise 1954.5.b

The Small Passion (Die Kleine Holzschuittpassion): The Fall 1954.5.a

Your current search criteria is: Artist is "Albrecht Durer".