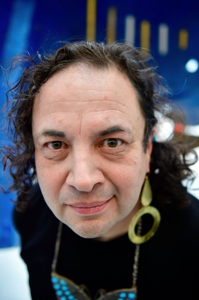 Born in Mexico City, Galindo studied musical composition and graphic design at the Escuela Nacional de MÃºsica. He then earned a second BA in film scoring and composition from Berklee College of Music in Boston, Massachusetts before going on to receive an MA in composition and electronic music from Mills College. In 2017 Galindo exhibited his Echo Exodus series at the documenta14 art biennale. Like Border Cantos, the work featured in Echo Exodus consists of instruments and graphic scores made from belongings left behind by African and Middle Eastern migrants and refugees attempting to cross the Mediterranean Sea by boat. Galindo included two immigrant boats he found abandoned on the island of Lesbos in 2016, ultimately transforming the refugee boats into sonic devices. He then used these makeshift instruments to perform his own compositions at documenta14. Images of these boats circulated internationally, and had become iconic during the European refugee crisis.

Galindo currently resides in Oakland, California and is a professor at California College of the Arts.

Your current search criteria is: Artist is "Guillermo Galindo".