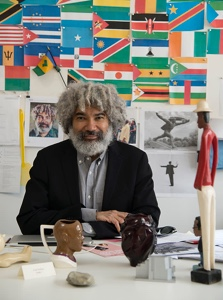 American, b. 1954
Fred Wilson (born 1954 in the Bronx, New York) is an American conceptual artist who frequently employs various museums as his medium, compelling viewers to consider the colonial past of many museum institutions and how these imperialist social and historical narratives perpetuated by museums have shaped the western canon of art.

After receiving his BFA from Purchase College in New York, Wilson went on to work as a museum guard, preparator, and freelance museum educator. It was his experience working as a museum guard that informed the creation of his 1991 piece Guarded Viewâfour headless mannequins dressed in the guard uniforms of the four major New York City cultural institutions: The Whitney, MoMA, Metropolitan Museum of Art, and the Jewish Museum. The piece challenged viewers to consider the social structures and power relations that render security personnel, many of which are from marginalized communities, invisible within these wealthy institutions.

Wilsonâs many accomplishments include receiving the MacArthur Foundation âGenius Grantâ in 1999, representing the United States at both the Biennial Cairo in 1992 and the Venice Biennale in 2003, and replacing Chuck Close as a trustee at the Whitney Museum in 2008.

Your current search criteria is: Artist is "Fred Wilson".