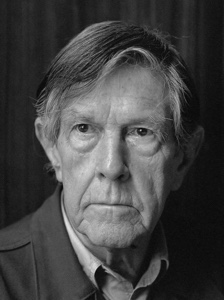 American, (1912–1992)
John Milton Cage Jr. (September 5, 1912 - August 12, 1992) was an American composer, music theorist, artist, and philosopher known as one of the leading figures in the post-war avant garde. During his lifetime, Cage was associated with many famous artists such as Marcel Duchamp, Robert Rauschenberg, and Jackson Pollock. During the late 1930s and early 1940s, Cage briefly taught and worked at Mills College, and was the first to propose the development of an experimental music programâa dream that would not become reality until almost twenty-five years later. Cage also worked in the physical education department as the in-house pianist for dance classes.

Cage is best known for his Minimalist musical compositions, such as 4â33â (1952). The name of the composition is in reference to its duration of four minutes and thirty-three seconds in which musicians played no formal instruments, instead allowing the sounds of the environment heard by the audience (shifting in oneâs seat, the occasional cough, etc.) to become the music. Cageâs intention was to challenge previous notions of music and musicianship and reshape the musical experience, explaining that âthere is no such thing as an empty space or empty time. There is always something to see, something to hear. In fact, try as we may to make a silence, we cannot.â

Your current search criteria is: Bibliography is "Moments of Impact".