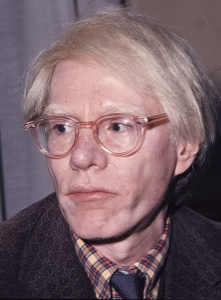 American, (1928–1987)
Andy Warhol (born in 1928 as Andrew Warhola in Pittsburgh, PA) was a visual artist, film director, and record producer who played a central role in the Pop art movement in America during the 1960s. Warhol is best known for his silkscreen printmaking, painting, photography, and film.

Starting out as a commercial illustrator, Warhol became transfixed by the repetition of images used in advertisements. The rise of the supermarket, symbols of consumerism, and everyday objects came to greatly influence his printmaking. Warholâs obsession with the concept of celebrity and the surrounding culture is greatly apparent in his artwork; his use of repetition and multiplicity extended to images of celebrity icons who were recognized within pop culture on a first-name basis such as Marilyn, Jackie, or Elvis.

Warholâs art studio in New York, The Factory, was cleverly named to echo mechanical reproduction that he strove to emanate in his own artwork. The Factory became a hot spot for emerging artists, celebrities, and drag queens alike, many of whom were seeking âfifteen minutes of fameââa popular phrase coined by Warhol himself. Having created some of the most well-known artworks of the 20th century, Warholâs worksâsuch as Silver Car Crash (Double Disaster), 1963âare among the most expensive ever sold on the art market.

Portrait of the Artists from the portfolio Ten from Leo Castelli 1969.67

Your current search criteria is: Artist is "Andy Warhol".