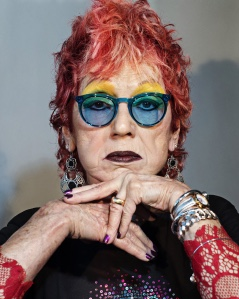 American, b. 1939
Judy Chicago (born Judith Sylvia Cohen on July 20, 1939) is an American visual artist and educator known for her contributions to the second-wave feminist movement. Chicago is perhaps best known for her piece The Dinner Party (1974-79), now part of the permanent collection of the Brooklyn Museum, which celebrates the achievements of women throughout history in the form of thirty-nine individualized place settings.

Born in Chicago, Illinois, Judy Chicago studied at both the Art Institute of Chicago and the University of California, Los Angeles. Though her early works were considered Minimalist, Chicago began to primarily produce feminist content in the late 1960s. It was at this point in her career that she exchanged her last name, Cohen, for the name of the city in which she was born. In 1970, Chicago founded the first feminist art program in the United States at California State University, Fresno; Chicago then co-founded a second feminist art program alongside artist Miriam Shapiro the following year at California Institute of the Arts, Valencia. Together the two created Womanhouse (1972), formed in collaboration with their students, which involved transforming an abandoned building into an installation and performance space representative of the female experience.

Your current search criteria is: Artist is "Judy Chicago".