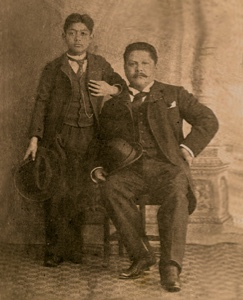 Mexican, (1852–1913)
JosÃ© Guadalupe Posada Aguilar was a Mexican political illustrator and lithographer known for his satirical use of calaveras (derived from the Spanish word for skulls) which, after his death, would become closely associated with the Mexican holiday DÃ­a de los Muertos, or the Day of the Dead. Posadaâs illustrative commentary on the exploitation of the lower class and the abuses of the Mexican government influenced many Latin American artists and cartoonists, including those involved in the Mexican Mural movement.

Between the start of the 1910 Mexican Revolution and his death in 1913, Posada worked tirelessly to create satirical cartoons and political illustrations for the press, many of which were featured in the magazine El Jicote. The work he produced during this period solidified his lasting reputation as a remarkable draftsman, engraver, and lithographer that played a significant role in Mexican art historyâhowever, Posadaâs artistic contributions would not be recognized as such until after his death. Impoverished and unknown, Posada died three short years after the eruption of the Mexican Revolution and was buried in an unmarked grave. It wasnât until the 1920s that Posada was championed as the printmaker to the Mexican people.

Your current search criteria is: Artist is "Jose Guadalupe Posada".