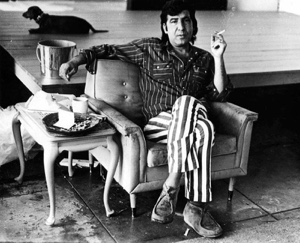 American, (1925–1969)
John Altoon (November 5, 1925 - February 8, 1969) was an American artist whose abstract figurative works were heavily influenced by the Abstract Expressionist movement. The figurative subjects of his paintings included abstracted forms loosely based on plants and biological objects, and were often erotically or politically charged.

Born in Los Angeles, Altoon was a prominent figure in the LA art scene in the 1950s and 60s. Having studied at the Otis Art Institute and the Art Center College of Design in Los Angeles, Altoon was trained in both commercial and fine art. During the 60s he was represented by the Ferus Gallery alongside artists Robert Irwin, Larry Bell, and Edward Keinholz, together known as the Ferus Group.

After being diagnosed with schizophrenia in his 30s, Altoon was able to seek psychiatric help that successfully enabled him to continue developing his artistic practice. Those years marked the most productive period in his career until, tragically, a heart attack claimed his life at the age of 44.

Your current search criteria is: Artist is "John Altoon".