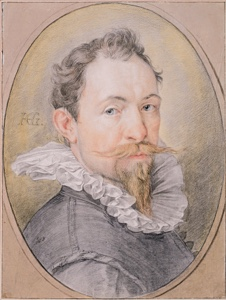 Dutch, (1558–1617)
Hendrick Goltzius was a German-born Dutch engraver, printmaker, painter, and draftsman who is regarded as the most outstanding Dutch engraver of the late sixteenth and early seventeenth century. He is best known for his Mannerist prints which encapsulate his technical mastery.

To make his mastery that much more impressive, as a child Goltzius badly damaged his right hand in a fire, leaving him unable to extend his fingers. Despite his physical setback, Goltzius came to achieve much fame and success throughout Europe, so much so that when he travelled to Italy to study Italian methods of artmaking, he did so while maintaining a low profile, going as far as concealing his maimed hand. He returned from Italy with a distinctively more classical style that aided in the transition in Dutch art from the aesthetics of Mannerism.

Goltzius was known for having an air of conceit when it came to his printmakingâan attitude that was well-deserved. However, his immense talent for engraving did not extend to his career as a painter, a medium which he shifted to in the early seventeenth century. Although he lacked the same acclaim for his work on canvas, Goltzius achieved international acclaim that has far exceeded his lifetime.

Your current search criteria is: Artist is "Hendrick Goltzius".